skip to main | skip to sidebar

It's been two years?!

I was just taking a walk down memory lane and painfully re-living the 50 day countdown that was on my blog in early 2007. Living with Esther had become quite excrutiating, and we were counting down the days of when she'd be leaving us and going to basic training for the Air Force. Now it's been almost exactly two years since then, and now I am starting another painful countdown. Esther is deploying to middle east for the first time. Needless to say, she's done a lot of growing up since then. She's really made the best out of the Air Force that she can, met a great guy, gotten married, and dare I say... become a real adult? All the sudden, she's one of the sweetest people I know, caring, giving, and still funny as all get out. She's making a great effort at being married, being a good wife, being a good airman. I'm really proud of how far she's come and who she's turned into. And I'm gonna miss the hell out of her while she's gone.
Posted by Kimmy at 10:17 PM 1 comment:

Despite the worldwide panic behind the "economic turndown", the year ended pretty well for the house o' Beveridge. And despite a crazy Christmas trip to VA that resulted in less than 24 hours actually spent in that state, I was happy to be able to spend time with Esther and Derek and my favorite boys. I don't want to go into too much detail about the trip, but one highlight was launching our suitcase out of the back of the truck in Sumter, SC. We didn't miss the luggage until we got home. Luckily, our clothes were strewn all over the street in front of Esther's neighborhood, so she was able to retrieve most of them. Thanks, E!!!

So tonight is New Year's Eve. Gone are my party days. I am ringing in the New Year with a near-beer and putting some flair on my FB corkboard. Living large, I know! I also drove to the Kroger in my robe and pajamas and waited in the car while Charlie ran in and rented a movie. Then we came back home, and he made fried oreos for a treat. Later the boys will be setting off some bottle rockets which will inevitably end up in my neighbor's yard, who already hates us for similar behaviors. The point of all this? I guess that despite having what some would consider to be an incredibly lame New Year's Eve... I am happy as a clam. Having a relaxing evening at home (and at Kroger) in my jammies, hanging out with my homies, letting them do what they do best... I only hope that 2009 is just as great! Much love and prosperity to all my peeps out there.
Posted by Kimmy at 9:37 PM 1 comment:

a typical Wednesday night at the dinner table

Notice that there are no girls in this picture?! 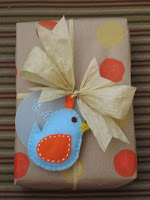 Okay, so I didn't have a close relationship with my mom. I often feel like I got short-changed when it comes to things that she should've taught me, other than how to drink a beer more slowly. But one thing she did share with me was the fun of wrapping gifts. She had worked in a bookstore as a college student, often being assigned to wrap all the Christmas presents. And she took that job very seriously. Attention to detail, that was her thing. So I've combined that along with another tradition that I picked up from Mayson, and that is making wrapping paper out of brown packing paper for a very home-grown feel. And here's the result, going with me to a baby shower this afternoon...
Posted by Kimmy at 10:07 AM 1 comment:

It's quite a rude awakening when a kid blasts into your room at 6:00 a.m. to let you know that the smoke alarm is about to go off at any second.

The other night I was making a list of sofas that I was comparing, to go in the fish room. My list had such weird names as paradox cocoa, improv mocha and cindy crawford rochester. I stepped into the bathroom for a few minutes to get ready for bed, only to notice when I came out that my list had mysteriously grown. Now on the list are also palindrome skeezy and delightful phart panz?!? I had such a giggle attack that I couldn't go to sleep. Thank God I married someone with the same sense of humor that plagues me. 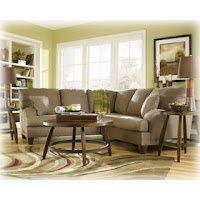 What a nice day back to work after my little vacation... we went on a retreat as a nice cap on the end of a stressful recruiting year. We spent the morning playing silly games which were, well, silly... but fun! And then after lunch, we went on a canoe trip. I didn't think I'd like it as much as I did. I paddled with Katie, whom I've never gotten to know very well. But we really had a nice time, and I think we have more in common than I originally believed. What a fun day, but now my shoulders hurt!!! Please someone give me a pill.
Posted by Kimmy at 7:14 PM No comments:

Well, I survived. My 20th high school reunion was this past Saturday. I was nervous. I was stressed. (I planned the event.) And it turned out great, despite myself. I think everyone had a good time. It was great to see everyone again, and I must say, most of my classmates have aged quite well. I'll post some pictures here soon. 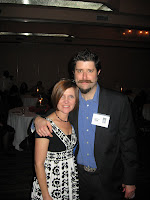 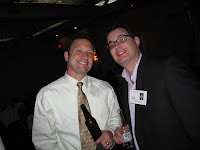 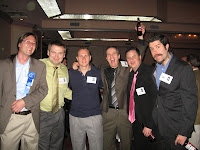 I'm sore. Stevie and I went adventurin yesterday in the woods and then I spent a good hour stooped over a bed of weeds. I think I'm just getting too old. Stevie was a good sport, though... especially when he ended up in the creek and almost lost a shoe. I gotta say, I can't wait until we move to the new neighborhood and have all that fun in our back yard. Here's the first finished house in the area... I could definitely live here!